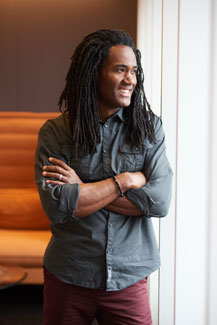 Solstik: The Force of Light

The Solstik Project is a globally-focused, connected-culture initiative that supports civic, economic, and cultural development efforts.

Solstik Founder Derran Eaddy has a life-long history of creative expressionism and social advocacy that has found him riding for Element Skateboards, performing music at the Kennedy Center for the Performing Arts, and taking documentary photographs on each of our planet's seven continents.

As an education advocate, he was appointed by the Governor of New Mexico to serve on the state Commission on Higher Education. Derran currently lives in Washington, DC, where he works as a strategic communications consultant.

As the Sun illuminates our world and sustains life, Solstik radiates the force of light into today's modern and connected culture.

Derran has been a part of the skateboard scene since the 1980s. He rode for Element Skateboards and several skatepark teams, created Solstik.com to chronicle his experiences, and began manufacturing Solstik skateboard products following his time on Element.

He regularly partnered Solstik on skateboarding and music events along the U.S. East Coast. In 2014, he became the first person over 40 years of age known to have kickfliped a 10 stair/3 block.

Derran DJed house music sessions at the 9:30 Club and Zeba and at NGO and nonprofit events for the World Bank/IMF, National Cathedral, French Embassy, Narcotics Anonymous, and DC's Art All Night activation in Dupont Circle. He established himself in the DC music scene by performing regularly at Busboys and Poets open mic nights.

He's performed his original acoustic piano compositions on college campuses. In 2011, he published those works on the Solstik Project titled, Water, which is available on iTunes, Spotify, and Amazon.

Derran was the lead singer in a rock/rap band that performed regularly on the world renowned 6th St. corridor in Austin, TX. He also produces the music you'll find in the Solstik videos and on the website's music page.

Derran traveled around the world during the last 10 years taking photos on all seven continents. Thousands of his photos are posted to his Flickr page, including images from an African safari in Kenya, a tour through Southeast Asia, visits to a variety of European countries, a South American excursion to the Amazon River and Machu Picchu, and a voyage to Antarctica. He's been throughout the United States taking photos of renowned landmarks and hidden treasures. His photos have been featured in Mashable’s Photo Challenge and have been shown at the Touchstone Gallery and other spaces in Washington, DC.

Some might think of Derran as a jack of all trades, but his degree says Master of Arts — plural. He earned his master’s and bachelor’s degrees in Communications from Eastern New Mexico University. While in college, Governor Bruce King appointed Derran to serve as a New Mexico Commissioner on Higher Education. He was twice elected Student Government President and went on to serve as a Washington Center Fellow in the Office of U.S. Senator Jeff Bingaman.

Derran received ENMU’s inaugural Award of Excellence for overall collegiate achievement and was the 1995 Outstanding Public Relations Student of the Year. He received the Sigma Alpha Epsilon fraternity National Besser Lindsey Award, which recognizes achievement in scholarship, athletics and fraternity. Derran was an NCAA football linebacker and team captain. His team won the Lone Star Conference Championship in 1991.

Derran has applied his masters-level education throughout his 20+ year career in the communications and Public Relations (PR) industry. He has extensive experience as a consultant to Federal agencies, such as the Department of Defense and the Department of Veterans Affairs. He worked in the education field for the National Education Association and Guilford County Schools in North Carolina. Projects he worked on received awards from Harvard University’s Kennedy School of Government, the Public Relations Society of America, and the National School Public Relations Association. Visit his consulting services website for more information.

Derran has been a regular contributor to Child Fund, the Smithsonian National Museum of African American History and Culture, and Bread for the City. He donates music, video, and photography production to SkateFest of Fairfax, VA, which raises funds for the Children’s National Medical Center. He also served on the Boards of the North Carolina School Public Relations Association, Reading Connections adult literacy non-profit, and the Action Greensboro economic development group.

solstik
The SOLST1K Project is a Washington, D.C. based creative venture that is capturing images, recording music and producing short videos. info[at]solstik.com